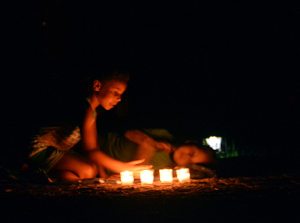 I have been remiss in posting lately, and I apologize.  Summer is gardening and long days at the stream picking mulberries and creating new herbal infusions and cordials and rosemary cakes and wonderful kombucha pickles, summer is leisurely visits with friends and watching the children catch fireflies.  My laptop just doesn’t even begin to figure in.

This week has been full to overflowing with laughter, realizations, music, dance, and incredible food, courtesy of my adored friend Anja who has been visiting from New England.  There is nobody like Anja.  As a child she used to bike several miles to her school, collecting apples and pears from wild trees along the way, then joyfully handing them out in the city.  When she was 15 she decided never to wear shoes, and went barefoot everywhere.  She sewed skirts out of old scarves and traveled all over Europe collecting folk songs and studying herbal medicine.  Now she leads circle dances, teaching ancient steps that peel away everything but the sense of sacred time.  She uses laughter about as often as words to communicate.

She traveled down from new england to help us dance the summer solstice in.  We gathered candles and torches and cakes and kombucha and scarves and guitars and packed them all into the car, merrily traveling toward the outdoor pavilion where the dance was to be held.  Then the heavens opened.  I mean it.  It was as though someone had slashed a hole in the sky and instead of space, there was an ocean up there.  The car was not driving, it was swimming along the road, and there was no airspace between raindrops.  There was only water.

Then, quite suddenly, it was over.  That curious clean garden-hose smell of recent rain flooded in and the world was bright.  I felt like the laundry, manhandled into cleanliness.  I didn’t mind.  It seemed a blessing. 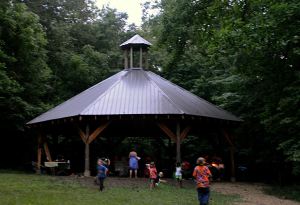 The pavilion was built from trees felled and milled on the land, a beautiful structure created with care and love.  We lit it with torches and candles, and the people came, and the dance began.  Our children raced around outside, going feral within half an hour, while we held hands and danced, swaying, turning, singing. 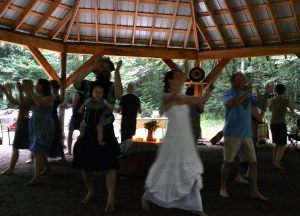 The sun set, turning the tips of the trees golden as it fell.  The songs got sweeter and longer.  The darkness settled in, the torches burned, and the ancient alchemy of motion and music transformed us from separate strangers into something far older and sweeter than that.  As we closed the last dance, the rains began again.

We parted ways, but as Anja (and her teacher before her) says, the dance goes on.  The moment you step out of your house to journey toward the dance, you are already dancing.  In Neolithic times the dance would go on for hundreds of years, someone always dancing, keeping the sacred time. 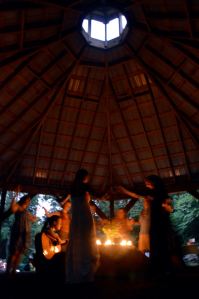 There followed a few days of riotous contra dancing and contra-dance-music-playing, and then on Monday we gathered again, dancing for the joy circle.  We opened with Qi Gong instead of yoga, because Qi Gong has been nudging at my heart for a while now.  I dropped the practice for years, after a rather grave confounding of art and artist (long story) but it is time to begin again.  We did the 7 Stars Qi Gong, drawing in the old, old power of the constellations, quieting our minds and hearts to prepare for the dance.

And then we ate rose geranium cake and lit candles and gathered in a circle. We danced for hours, laughing, falling down, falling in.  And then we closed the circle with Caravan, danced to the words written on Rumi’s grave:

This caravan is not of despair

Come, come, whoever you are

This caravan has no despair

Even though you have broken your vows

Still come again, come, whoever you are

Whoever you are, come.

I sang with Anja, lit by golden candlelight at the center of the circle, eyes closed.  We sang like this together years ago, far far away, so many rivers of time ago.  We have changed and grown and hurt and healed so much since we last sang together.  I know that I have broken vows innumerable, but my heart keeps coming home. 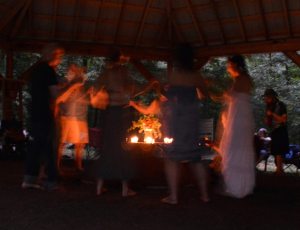